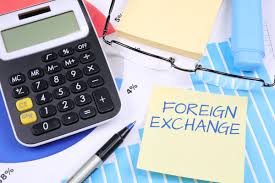 secondly with the size of the transactions. Further, the rates applicable to spot transfer of demand deposits differ from exchange of bank notes and travellers cheques. Finally, rates for future delivery differ from spot exchange. Segments of Foreign Exchange Markets

(a) Spot Market and

Spot market is the market where the transactions are conducted for the spot delivery of currencies. Here spot delivery means the delivery after two days the spot contract is closed. The rate, at which one currency is traded for another is called exchange rate. The exchange rate for immediate delivery is called Spot Exchange Rate and is denoted by S(.). Where S() is the relationship between two currencies, e.g. S(Rs./S) = Rs. 36.10/S, is the relationship between rupees and dollars, which says that one dollar is equivalent to Rs. 36.10. Instead of single currency (dollar) this can be a basket of currencies such as SDR (Special Drawing Right) in this case we write spot rate as: S(Rs./SDR). Here immediate delivery means delivery after two business days (or less in the case of Latin American countries or for particular transactions) in the countries of the currencies involved in the transactions. The market where the purchase and sale of currencies is contracted for spot delivery is called the Spot Market.

Quotations at the foreign exchange market
A quotation is the amount of a currency necessary to buy or sell a unit of another currency. When it is expressed in currency terms it is called out right rate e.g. S(Rs./S) = Rs. 35.980 is an outright rate between rupees and dollar.

The quotes are usually made in the form of ‘buy’ and ‘sell’ or ‘bid’ and ‘ask’ rates. The ‘buy’ quote is the price at which the exchange dealer is ready to buy a currency for which the quote is made and ‘sell’ quote indicates the price at which the dealer is ready to sell the currency. The ‘bid’ and ‘ask’ are the alternative terms for the above two quotes. Some times ‘ask’ is also referred as’ offer ‘price. An example of ‘bid’ and ‘ask’ price is: Currency Notes: Buying: Rs. 35.10/$. Selling: Rs.
36.35/$ (Source: Hong Kong Bank Treasury, Bombay, 17th June, 1997, quotes from The Economic Times)

Relationship Between Bid and Ask Prices of
CurrenciescOne important thing to know about the bid and offer rate is that when a bank quotes for a currency, it simultaneously offers another currency in lieu, i.e., if it buys dollars for rupees, it is simultaneously offering rupees for dollars. Thus, there are two sides of all quotes. For example, if a bank quotes bid rate at spot for dollars as S(Rs./bid $) it simultaneously sells rupees for dollar. In particular, if S(Rs/bid S) = Rs. 35.50/
$ which is the bid price for dollar but at the same time it is the ask price for rupees in terms of dollars. The inverse of this ask rate of rupees would again be equal to the bid rate of
dollar. In other words:

S(Rs./bidS) = 1/S($/ask Rs.) and S($/a
This can well be seen from the above quote: Bid rate
for dollar is Rs. 35.50/8 = ask price of Rupees in indirect
quotes. And the direct quote would be S (S/askRs.) = $(1/
35.5)/Rs. = $0.0282/ Rs. Now if we invert this rate we find
that this equals the rate with which we started.
AFTE
In general terms we can write:
S(x/bidy)=1/S(y/ask x) and S(x/asky) =
Where x and y are currencies of two countries.
The above equations define the relationship between
“bid’ and ‘ask’ rate of direct and indirect quotes.
Spread/cost of Transaction
102
Ask and bid differential is called the spread.
When quotes are direct: l Spread-Ask-Bid
rat However when the quotes are ii)direct the spread

This segment of market is an important part which makes the foreign exchange market vibrant. In this market the forward contracts are bought and sold at forward exchange rates. Hedging and speculation are the main activties which pertain to forward markets.

Forward Exchange Rate – The exchange rates for
delivery and payment at specified future dates are called Forward Exchange Rates and is denoted by F(.). Again F(.) specifies a relationship between domestic and foreign currency. The forward exchange rate is contracted in the present for future delivery of foreign exchange, e.g. 60 days forward rate between rupees and dollar is the rate at which the foreign exchange dealer can arrange a transaction between rupees and dollar 60 days hence. In this book a forward quote is denoted by F(Rs./S). In other words, the rate at which future transactions are contracted in the present for future delivery of foreign currency is the forward rate. The market where the purchases and sales of currencies are contracted in the present for receipts and delivery in future is called the Forward Market.

Forward Exchange rates are determined by forward demand and forward supply of various currencies, e.g. an Indian exporter of software, who expects to receive payment in dollars after three months might seek to reduce risk due to an unfavorable movement of exchange rate in the future by contracting a sale of dollars in the future. In this process, he guarantees future price of dollars in terms of rupees and this increases the supply of dollars in the forward market. A foreign currency is said to be at a forward premium if its future value exceeds its present value in terms of domestic currency and it is said to be at discount if the converse is true. For example, if the spot rate between rupees and dollar
is S(Rs./$)= Rs. 35.70/$ and three month forward is: F.(Rs./S)
= Rs. 36.90/$, these rates imply that dollar (foreign currency) is at a premium and Rupees is at discount in the forward.

Quotations of Forward Rates – These rates are also quoted in the form of ‘bid’ and ‘ask’ rates and the spread also depend on approximately the same factors as mentioned above except for one factor that represent period exchange risk (may be maturing risk). This risk arises because the delivery of the currencies is to take place after some time( 30-days, 60-days or 90-days). This element of risk becomes more important in determining the spread in the forward market.